This Book Club posts contains recommendations for books about a specific topic or subject area and are available wherever books are sold. If you decide to purchase any of these books from the Amazon links in this post, I will earn a small commission. I will use that commission to support my book habit AND bring you more book club recommendations like this one, to help you decide what to read next. I do think you should read these books, whether or not you buy them from Amazon or borrow it from a friend or the library.

As a recovering know-it-all 1 I love knowing things. I love sharing the things I know with others even more. I love the rush of adrenaline that comes when you have the right answer to an obscure question.

I also love Mormons and narwhals, which may feel unrelated, but I promise, it’s not.

Here’s the story about how narwhals taught me to have more questions about the world.

I used to be fairly certain in my opinions about everything, particularly my religious beliefs, which informed the majority of the choices in my life. They weren’t just my beliefs, but were part of my identity. I KNEW what I KNEW and nothing could change my mind… until my values (1. Everybody plays or nobody plays and 2. Be excellent to each other) and my beliefs (the Mormon church’s fight against the legalization of gay marriage and their approach to the lgbtq+ community as a whole) were at odds.

Side note: I recognize this conclusion is not true for everyone. That’s okay. I’m not here to change your mind about that. Your experience and my experience will likely differ. Our assessments of the situation and actions will also differ. However, as the main character in my own story, this is true to my experience, especially at the time. As I told someone close to me recently, I believe changes in LDS church policies regarding LGBTQ+ members will come from pressure being applied internally and externally, as we saw with changes to policies regarding race in 1978. There is a case to be made for LGBTQ+ allies staying as well as leaving. The decision will be different for everyone. 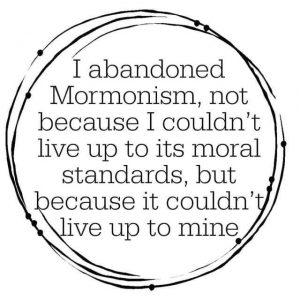 While I’m not a fan of the word “abandoned” in this image, the sentiment is the same. Many people think those who leave the Mormon church do so because they want to sin, are lazy or have been led astray because they didn’t work hard enough to keep their testimony strong. In my case, it was a matter of the church excluding those who the Jesus I’d learned about would have not only reached out to, but would have been more concerned about than any mainstream member of the church.

Back to the story

It was a distressing time in my life.

As a result of the information I found, I ended up rethinking my entire identity, or at least that’s what it felt like at the time. Turns out my identity was more firmly rooted in my core values of equality and kindness than in the church I belonged to. The church was simply a culture I had been raised in, a culture that I could discard when it was in conflict with my values.

What I had done was rethink not only my entire life, but everything about who I thought I was. It is arguably one of the hardest, most painful things I’ve ever done (so far).

While trying to work through the rebuilding my life and my identity a therapist I saw tried to teach me about emotional boundaries. When you’ve been raised to believe that everyone is watching you, looking up to you and paying attention to “your example” it puts the burden of other people’s emotions on your shoulders. That’s not healthy. Other people are responsible for their own feelings. I am responsible for speaking the truth (as I know it) with kindness and managing my own emotions, not the emotions of others.

This was one of the tools therapy taught me so I could start working on building an identity based on who I was, rather than who I was supposed to be according to other people. The therapist used an analogy of building a new house to help me visualize how to construct my identity.

Your entire life you’ve lived in a house built for you by other people. They decided the design, the layout, the decor. They chose what the gardens looked like, the location and the paint colors. They may have let you help, but didn’t let you do anything to your house they didn’t approve of, at least without emotionally punishing you using guilt and shame.

Now you’ve decided not only to redecorate, but to tear the entire house down and start over. Those people? They’re upset. You’re not only destroying your house, but the house THEY built for you others! They see it as you rejecting them, because you’re tearing down their version of you.

You are causing them pain through this process.

But that pain isn’t your job to fix and isn’t your responsibility to manage. That is their emotional work to do.

Your responsibility is to build a house that works best for you. A house in a location that makes you happy. A size, design and layout that feels good to you. Decorate in a way that brings you joy. Plant a garden of beautiful hopes, wishes and dreams to water and watch grow.

Learn who feels at home with you and who only comes around to tell you that you’ve got to change who you are to make them comfortable. Your job is to manage who you let through your front door. Even more important? Deciding who gets to stay. Fill your home with people who bring you joy and who celebrate you for who you are.

A narwal of a tale

Building my new “Amber House” taught me all sorts of new information about how brains work, what cognitive dissonance was and why it was so painful. I also learned more about logical fallacies than is healthy for any human. I thought I was so much more aware of the world now that I had this new, enlightened view.

It turns out I was wrong. 2

What happened? I learned about narwhals. 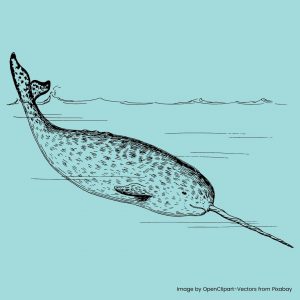 I know what you’re thinking, “Amber, everyone knows about narwhals. They’re everywhere!” But that is now. They’ve become common in popular culture, with children’s books written starring them (these children’s books by Ben Clantoon are my absolute favorites and if you have a baby I’m likely to send them to you), narwhal plushies are easy to find, they show up on t-shirts, receiving blankets 3 and baby onesies4 and you can even buy super creepy narwhal tea infusers.

There was the famous Mr. Narwhal in Elf, but other than that? Narwhals hadn’t made their way into pop culture quite as much as they have now.

At this point in 2013 I was a marketing and social media intern for our local aquarium. Somehow, while doing aquarium stuff I stumbled across a picture of a narwhal on the internet. I may not have known about narwhals, but I did know about photoshop. I was also aware of Stephen Colbert’s recent success at changing Wikipedia pages to prove that you couldn’t believe anything you saw with your own eyes on the internet.

This, in addition to my recent complete life upheaval, made me extra wary of the truthiness of this image and information.

“Truthiness is,” as defined by Colbert, “the belief or assertion that a particular statement is true based on the intuition or perceptions of some individual or individuals, without regard to evidence, logic, intellectual examination, or facts.”

Who wouldn’t want to believe in whales with unicorn horns? We all would!

I couldn’t believe that an animal like this would exist and I wouldn’t know about it. That’s right. I was so certain that I would know that narwhals were real that the information I’d found couldn’t possibly be anything other than an internet prank.

Despite the available digital evidence, I wouldn’t allow myself to believe that any of it was real until I went to the library and looked up printed images of narwhals from before the internet was widely available. I was so certain I was right, and the thought of not being right, even about this relatively inconsequential fact, was still painful to my know-it-all brain. 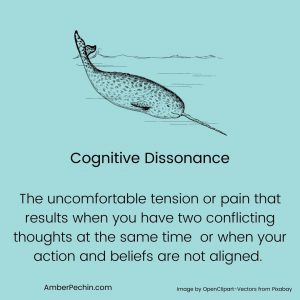 Looking back, it’s a bit ridiculous. I’d re-examined the religious beliefs I’d been raised to believe my entire life. I thought that just rethinking those tightly held beliefs made me invincible when it came to knowing what was real and what wasn’t. Turns out I was wrong. Again.5

Since that experience I’ve tried to reframe my values about intelligence to be rooted in curiosity and learning rather than what I already know. To be happier to have more questions than answers. To question the answers I think I have and be open to changing my mind with more information.

So here’s to being wrong more often!

Okay, maybe not being intentionally wrong, but admitting6 I’m wrong more often? Getting that rush of adrenaline by learning I’m wrong vs being right?

Essentially, seek more questions, rather than attempting to have more answers. 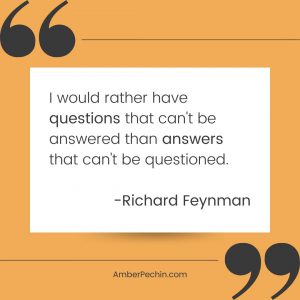 Why? Well, there is so much certainty in the world, about everything. This means someone has to be wrong about something. at least sometimes, so maybe it’s me? At least some of the time.

When I am wrong, how would I know if I’m unwilling to rethink my previous position?

Being open to the possibility that there are things you don’t even know you don’t know certainly helps. If nothing else, it means there are still wondrous things out there for me to discover.

Can you imagine how sad would my life have been if I had been unwilling to accept the possibility of narwhals?

I’m still working on not being a know-it-all. 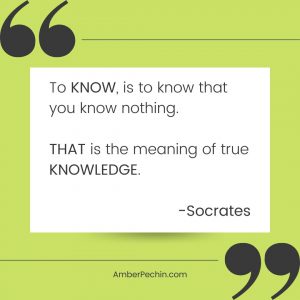 I have an entire room of the imaginary house I’m building, which is still a work in progress, dedicated to the questions I still need to ask. I have another room entirely that’s dedicated to the things I don’t even know I don’t know. You should see the shed where I keep the things that current Amber disagrees with past Amber about.

One of my favorite things is learning how to learn better. Learning how to think about the world differently and explore better ways to combat my inherent biases, as well and figuring out how to short circuit the brain tricks that stop me from being open to new information.

The books below have helped me learn better ways to rethink the things I think I know. They’ve been Instrumental in learning to ask more questions, have better conversations and to be open to more possibilities.

There are many books that I’ve read that have helped me think differently about how I think and books that challenge what I think I know. (That’s a mouthful). This will be an ever-growing list, and I’m always up for recommendations for other books to add, please drop your recommendations in the comments!

I plan to review them all in depth at some point, because they each deserve their own post, but for now, here is a short summary of each including what it helped me think differently about.

What books have helped you on your journey to change your thinking? What am I wrong about now? (Not even kidding, I’m open to that discussion). Leave a comment and continue the conversation!