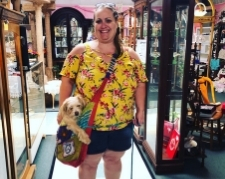 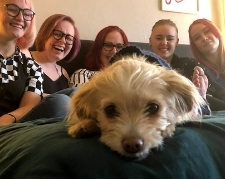 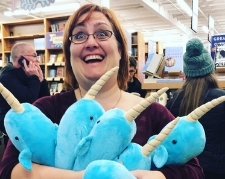 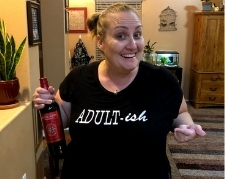 I’m glad you dropped by my little corner of the internet.

Like most people, I’m more than one thing. To quote my Twitter bio, I am a “writer of words and teller of stories. Human of earth. Loves dogs and humans and Susan, who is a little of both.” We all know you can’t lie on Twitter.

I’m also a business owner, speaker and single parent of four kids. I love people, their stories and just how magical the world is. I’m a super-nerd, but not about star trek or comic book heroes (although they’re cool for a minute) but I prefer to nerd out about the world around me, how it works and the people in it. I love to learn new things, go new places and meet new people.

A fundamental belief of mine is there is no useless information- just information wasted on people who don’t appreciate knowing spontaneously that bamboo is actually a grass and that physicists name science things the coolest names like “quarks” or “Quantum weirdness” and “Excitons.”

I was raised in a very fundamentally religious home (Mormon) and was fairly sheltered as a child. This means I probably haven’t seen that movie you’re referencing from the ’80s, but I’ll 100% Wiki the summary to catch your cultural references. It also means I got married at 19 and had four kids by the time I was 26.

Since then I’ve left my religion, divorced my husband (but kept the kids and added a dog- I like them) and started exploring the world with entirely new eyes. This gives me a different perspective than many people. Basically, I’m a 40-year-old who has the responsibilities of a 50-year-old while trying to soak up life as a 25-year-old. It’s a beautiful mess.

I always have plans for a million things, 100 things on the back burner and at least 15 projects boiling over.1  That’s sort of what this site is going to be about- and whatever else sounds interesting because that’s how I roll. I’m glad to have you along for the ride.

While talking to my oldest daughter about this project and expressing my hesitancy to promote myself like I’m anyone special and she, in her 87-year-old soul of wisdom she told me, “You are allowed to take up space on the internet! People who are assholes take up space all the time without even thinking about it, you can be a positive force for good out there!”

So I guess that’s my real goal. Take up space in a positive way. That and to make enough money to support my travel habit and build my van… But that first part sounds better. Let’s focus on that. I’m glad you’re here. Pull up a chair and stay awhile.