This post is part of a project to get over my fear of imperfection by posting a photo and an imperfect 1,500+ word story every day for 100 days in a row. 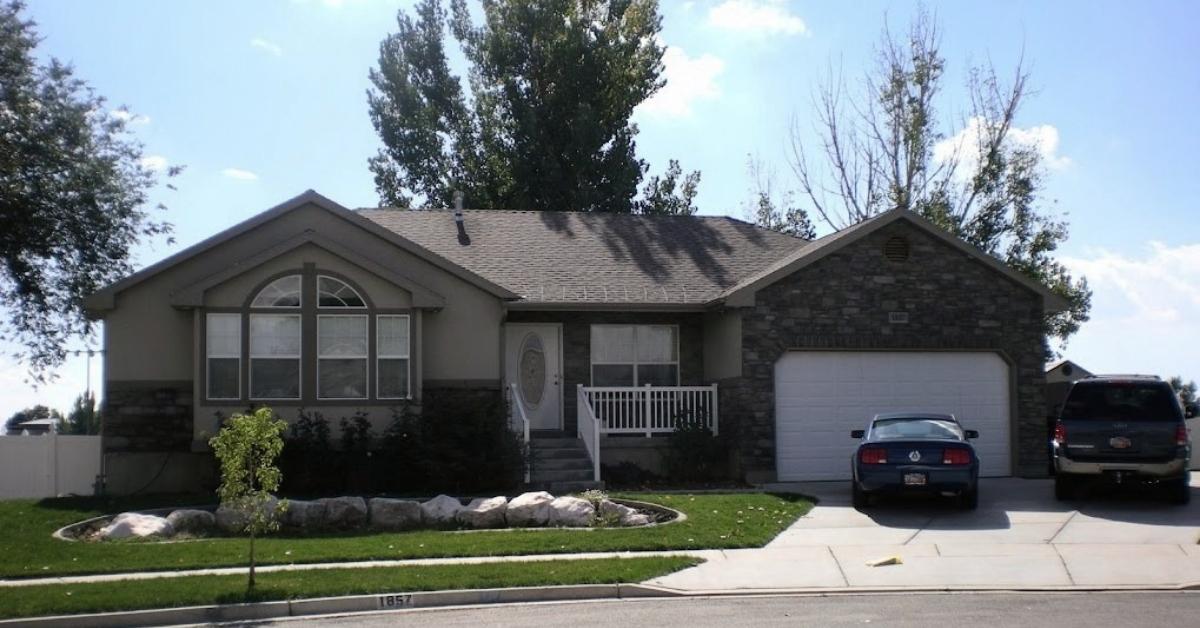 I was looking for photos to post today for my first post in my new series/personal challenge and this photo came up. I wasn’t really sure what I was going to write about today, but imperfection seems like a logical place to start given the goal of this exercise. Publish every day, even if it’s not perfect.

The time I lived in this house was probably some of the hardest years of my life. A year and a half earlier I had moved (back) to Utah under duress. I didn’t want to move back to Utah. I would have embraced a move anywhere else, except maybe Idaho- which is probably the most Utahn thing about me. We moved to a couple temporary places before buying this house, partially due to the housing crash and trying to sell our house in Las Vegas- the dream house we’d built and “were never moving again.”1

Kid #4 turned 3 the month we moved in. It was the fifth placed this kid had lived in since we brought them home from the hospital. That’s a lot of change for all of us. We all needed a place to settle down, create a sense of stability and permanence in the world.

It was a little more than a year since we’d moved to Utah and I had more or less resigned myself to the fact that this is where we’d be for the duration. 2 I was determined to find the perfect house in the perfect neighborhood and bloom where I was planted. I’m pretty resilient and am pretty good at making the best of whatever situation I find myself in. This situation, from the outside, looks pretty good doesn’t it? A large, beautiful home at the end of a cul-de-sac in a quiet town. Our backyard had a gate that opened up into the city park, which shared a boundary with the local elementary school. The junior high was across the street from the elementary school.

I had four beautiful kids, a successful husband and a very comfortable life as a stay at home mom. Most of the women on my street lived very similar lives. The neighborhood was full of friends for everyone. The moms spent a lot of time socializing with each other while watching the kids ride bikes, play games and generally have the sort of childhood reminiscent of my 80’s upbringing. The kids went to school together, most of the neighborhood went to church together and the families in the neighborhood celebrated holidays as a group and even vacationed together.

But very quickly the shiny facade of the neighborhood started to show the strain and cracks and behind the perfect presentation was layers of exclusion, petty meanness, superiority complexes and the human imperfection of everyone who lived in, as I was informed the first day we moved in, “Celestial Circle.” I have more empathy and compassion for the imperfection of my neighbors now that I have some space and time between the years we lived there. Still, I’ve never struggled as much with my mental health and well-being as I did in that neighborhood.

We moved in before my ADHD diagnosis, which explains a lot of why keeping up with the house, kids, yard… and the neighbors felt impossible. I was constantly failing my own expectations- but I was also failing everything I was supposed to be as a good Mormon wife and mother in the heart of small town Utah. There wasn’t a place for failure, or even not meeting expectations. It wasn’t about actual perfection. It wasn’t about being a good person or a good wife/mother/friend/human. It was about the appearance of being those things.

It was about having a perfect home that was always perfectly spotless. The yard needed to be similarly upkept at all times. The children should be impeccably groomed, just like their effortlessly thin and fit parents with the perfect marriages, marathon stickers on their cars, and the ability to do all of this while spending the majority of their days sitting on someone’s front porch talking about nothing — except what other people were or weren’t doing.

My values were in immediate conflict with the neighborhood when I moved in. I am certainly not perfect when it comes to most anything in life, but I’m a pretty good friend and have a thing for making sure people feel included. Unfortunately, I’m also human and this wouldn’t be the first time in my life (or the last) that I didn’t live up to my values in an effort to fit in.

The image of perfection in everyone around me had me convinced that this would be the place where I’d finally get my life figured out. I was only so disorganized and messy because life had been so disorganized and messy in the recent years. Maybe I’d finally figure out how to not have laundry be the bain of my existence? Maybe I could figure out the secret to fixing the conflict in my marriage that felt unfixable. Maybe my kids would magically be perfectly behaved and stop fighting with each other? Maybe, just maybe this would be the place where I could finally figure out how to do all the things a good Mormon woman was supposed to do.

Spoiler alert. None of those things happened. 😉 I know, you’re shocked.

What did happen was a whole lot messier.

I tried to keep up with the too big yard, the too big house and a very ambitious vegetable garden. I also decided I needed to make a gargantuan effort to feed my family mostly from scratch. Grinding wheat and baking bread (which, to be fair, my homemade bread is quite delicious), growing a huge garden that required canning and preserving food in massive amounts every fall. I made a hearty breakfast for my kids every morning and a balanced dinner every night. I volunteered in their school classrooms, volunteered at church, tried to have regular date nights with my husband, attend the temple on a regular basis and still tried to spend time with the neighbors. Oh yeah, I also was trying to run a business from my home baking cakes and catering events.

Despite my efforts my gardens were always filled with weeds, unless I spent several days only doing that, which meant I was neglecting the house, laundry and kids. My kids didn’t magically become perfect and weren’t automatically perfect students. School was actually quite a struggle with them. I don’t know when I “gave up” or even if it was a conscious thing. But the shiny veneer of the neighborhood wore thin very quickly.

I think it started when I realized just how out of touch I felt with myself. There was always something that “needed to be done” but not much of it brought me joy or even a sense of fulfillment. Then I created a book club. I’ve always been a voracious reader, but that had fallen by the wayside in my newfound state of always busy. I started meeting with women who didn’t live in my cul-de-sac to have deep conversations about what we were reading and what it meant. I made friends who were much less concerned about the state of my front garden than they were about my thoughts on things that were interesting.

Then I joined a second book club. I’d “applied” to join this book club fairly soon after moving into the neighborhood, but I’d been put on a waiting list and couldn’t join until enough people had dropped out (or been given the boot3 for not showing up two months in a row). I craved interaction with other women who were a whole lot more like me than my neighbors. But I was also craving external validation and human interaction as my marriage grew increasingly worse.

But, the more I read, the less important the outward perfection became, well, to me at least.

Embracing the Messiness of Life

One morning I was sitting on the couch in the living room, reading the book for the upcoming book club when there was a quick knock on my front door as it was already opening. It was my next door neighbor looking for her missing toddler, who had the tendency to show up and spend hours at other people’s houses in the neighborhood. She slowly looked at my pile of clean laundry that needed to be folded and put away and me curled up reading Cold Sassy Tree 4 With a tone I’d come to recognize from her, she stated, “I don’t know how you have time to read so much.”

I can pinpoint this turning point in how much I cared about what the neighbors thought because my immediate response was, “I read rather than clean. It’s why your house is so much cleaner than mine.”5 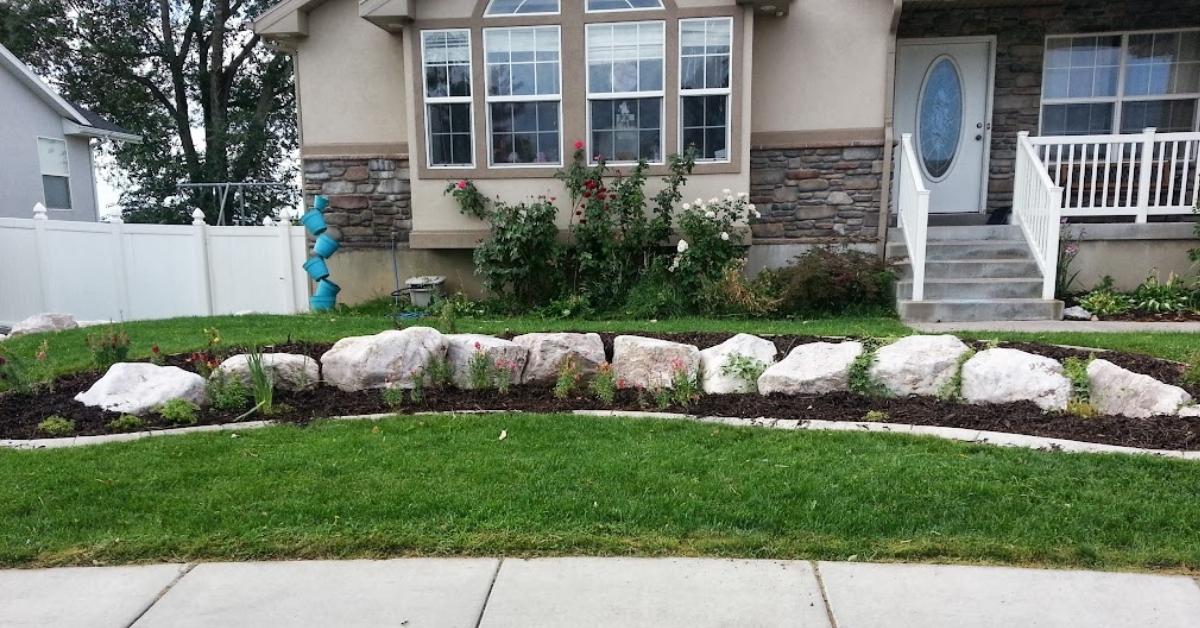 This was back in the days when social media was in its infancy. Pictures were taken on a digital camera rather than phones- because the quality of phone photos was laughable. The resolution of these photos is nothing close to the pictures I can snap with my phone today. I felt more pressure for perfection in this neighborhood than I’ve ever felt on social media. Maybe it’s because there wasn’t the ability to constantly curate the image of perfection we project to others? I can guarantee that the above photo of my garden was only taken because I’d just spend several days weeding it so it was presentable enough to photograph — at the expense of everything on the other side of that front door.

We lived in this house from May 2008 until February 2014. Almost exactly in the middle of this time period I would leave the LDS church, much to the shock and horror of everyone in my life, including the neighbors, some of who would later tell me they saw it coming.6 I also briefly separated from my husband as our marriage issues came to a head, exacerbated by issues in his family of origin and the criminal and legal issues surrounding them.

I went from living in what appeared to be the perfect neighborhood, in a great house, with the perfect little family, to having my entire life fall apart in a very public way. I got a whole lot better at being myself when perfection was no longer the goal. It stopped being the goal in part because I knew it wasn’t achievable. Illusions are just that, an image that you can’t hang onto.

I went back to school, went to therapy and started to figure out who I was when it didn’t matter what other people thought. Turns out I’m pretty rad. 😉

The pictures of this house seemed to resonate with the thoughts I’ve been having the past few days about how much I’m struggling putting my stories and thoughts out there. The fear of judgement and scorn from people who are more concerned about making sure there aren’t any cracks in the images of perfection they’ve constructed in their worlds. This picture is a reminder of who I became during this part of my life. I’ve not stopped being her, but I’ve kept her pretty quiet the past few years.

This is my commitment to stop doing that. Hold me to it?