It was 2015 when I started dreaming about the VanLife. I was newly separated and had my kids for two weeks at a time, and then they went to their dad’s house for two weeks. I planned to spend part of my month in Phoenix, living in a house and taking care of my kids, and the other part of the month traveling and exploring, while also working from the road.

This was before #VanLife really took off even- but unfortunately the trend grew before I even had a van. This didn’t stop me from talking about it with anyone who even showed the tiniest bit of interest, including, a first (and last) date once. He asked over drinks, “what are your plans for the next five years” like he was interviewing me for a job or something. Lucky for him I’m always working a five-year plan. But after I told him about the #VanPlan he responded, “so you plan to be homeless?” If only every person was so efficiently sorted into the “this will never work out” category!

People frequently asked why a van and not an RV- but my goal wasn’t to explore while dragging an RV around with me, limiting where I could go and consuming so much more gas than I wanted to pay for. 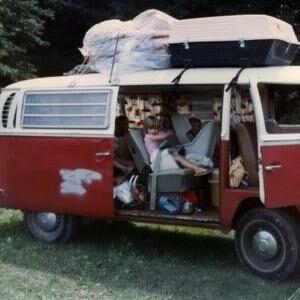 I’m in there somewhere…

I grew up tent camping from the time I was a baby. “Roughing it” isn’t an issue I’m too concerned with. I’m willing to sacrifice pretty much all comfort in the interest of seeing new places and experiencing new things. When “meeting all the people” is also goal, being in the places where you meet the people to hear their stories is important. Traveling by van, staying in campsites and wandering the backroads just lead to more conversations.

My primary goal was having the ability to explore without needing to pay for hotels or set up camp everywhere I went. I did want to have the ability to gradually build a van out into a comfortable place to live and work, regardless of where I was parked. The concept in 2022 is a lot more understood and common than it was in 2015.

During this time I was actively dreaming and talking about my Van Dreams, but I wasn’t actually actively looking for a van. My business was new and income wasn’t reliable enough to lay out cash for a van that couldn’t transport all my kids. I was doing the research though, I knew what I was looking for.

My goal was to buy a van that could handle rough roads, have easily accessible parts for repairs, blend in on city streets and be good for stealth camping when needed. I knew that Central and South America were on my list of places to travel, so and older van that didn’t attract attention was key. This is one of the ways my van plans differ from the InstaVans.1

“Tell me about your dream car”

Back to dreaming about my future van. In December 2018 the airbags in my Mazda were recalled. To get it fixed I needed to take it into the dealership. While waiting for the repairs I was approached by the sales manager with an offer to “get you into a new car today — and even lower your payment.” I laughed and told him that 1. I didn’t need more debt and 2. he certainly didn’t carry my dream car.

He responded with, “try me.”

So I did. “I want a full-sized van, either a Ford or Chevy, older than the year 2000, under 100,000 miles. I’m indifferent on color and am okay with some wear on the body as long as the engine and transmission are in good shape.”

The salesman took a breath and then said, “you’re right. I wouldn’t typically have anything like that on the lot. However we had a trade-in yesterday that you might be interested in. We’re planning on taking it to auction on Thursday.”

He took me to the back lot and there she was in all her glory. My van. A 1999 Chevy Express 2500 Extended Cargo van with only 51,000 miles on it. Even better? I was able to trade in my Mazda, pay cash for the van, and finance a Ford Flex.2 He was also right about ending up with a lower payment. But it was also lower principal. 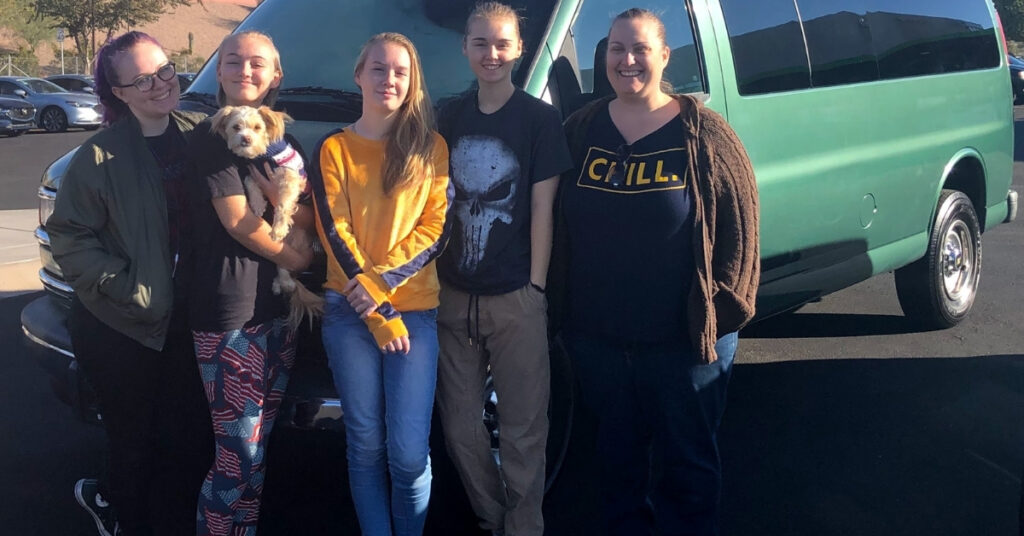 It turned out to be a very good day.

A Blank Slate for My First Trip

The van was pretty much empty inside. There were a few changes that had been made, upgraded seats for the driver and a swiveling passenger chair. An upgraded stereo system, including a six-disc changer under the driver’s seat and tinted windows. But overall it was a blank canvas. 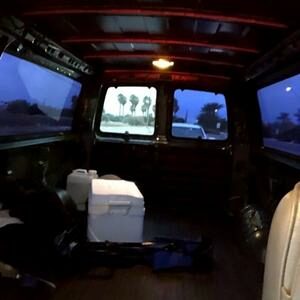 I already had plans to meet friends in the desert the next weekend for a birthday bonfire. The location was over an hour away, perfect for my maiden voyage. I threw a cooler, some water and a sleeping bag in the back of the van and was on my way. After a quick stop to pick up a rug a friend was getting rid of, and to buy a mattress at IKEA I was was ready.

The bonfire was fantastic… until it started to pour down rain. Not your typical night in the Arizona desert. I was glad to have a dry and cozy place to crash for the night rather than driving home in the dark and rain.

One important lesson I learned the next morning was that my van likes to lock itself. Particularly if you lock the doors to sleep, get up and drive for 3 minutes to be closer to where the area that needed to be cleaned up was, and then got out the side door rather than the driver’s door. That *click* of the doors locking behind me, with the keys in the cupholder, was SO loud.

I was grateful my insurance agent had insisted that I “spend $12 more a year for roadside assistance since your van is older and you plan on traveling a lot.” Money well spent.

Sleeping in the van that night with the sound of the rain on the roof was so relaxing. It’s hard to explain just how good it felt that this thing I had been dreaming about doing for so long was finally happening. But the story only gets better from there, because I was about to meet Ed Jr. 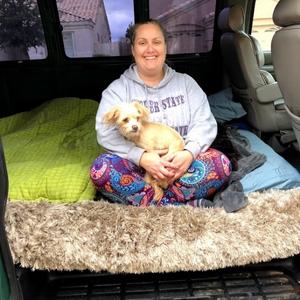 Both the Van and the Flex had minor repairs the dealership needed to take care of, so the Monday after my first campout I took the van to exchange for the Flex. The van was covered in mud after my short weekend adventure, but the dealership washes cars after servicing them, a win-win if there ever was one! 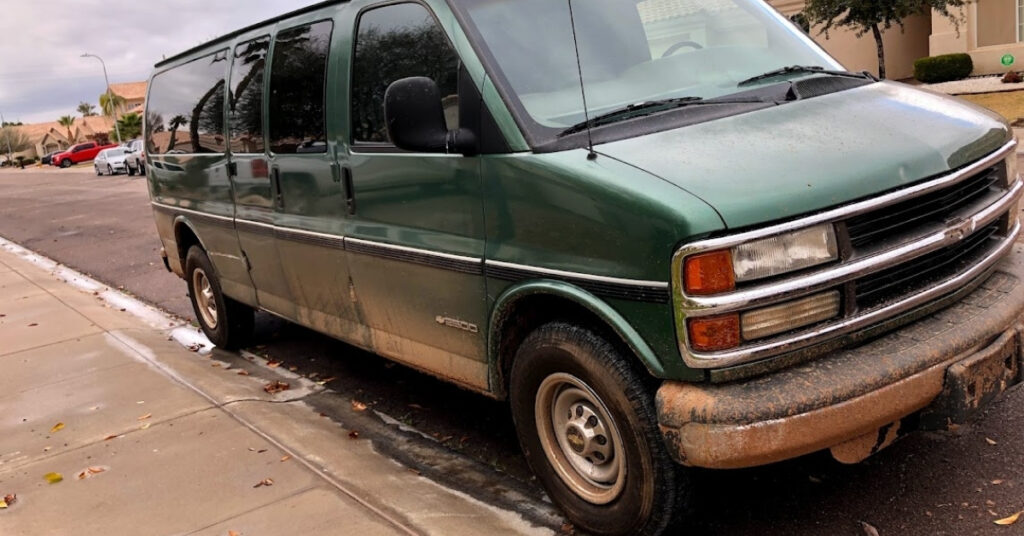 As I pulled into the dealership I was on the phone having a very heated discussion with my business partner. I don’t even remember what it was about, just that I was running on heightened emotions as I parked in the drop off lane in the service area. I sat in my car for a few minutes finishing my call but couldn’t help but notice that the two men standing outside the car in front of me seemed to be talking about me. They kept looking back and I swear I saw one point.

I ended my call and got out of the van when one of the men called out to me, “hey, that’s my van!” My first instinct was to want to insist that no, it was MY van… but thankfully I just looked at him with a puzzled look on my face.

The person who traded in the van was standing in front of me and he told me the following story (to the best of my recollection).

His dad, Ed Sr, had purchased the van brand new in 1999. The purpose was to have a vehicle to use to not only get from their home in northern California to their ranch in Southern Oregon, but to have a vehicle that could haul stuff and that could be slept in when he spent time on the ranch. Usually a month in the spring and a month in the fall. He was very excited to outfit to be the perfect vehicle for his twice a year time at the ranch.

He was only able to do this once. After his first trip, but before his second, he had a major stroke. While he survived the stroke it did limit his ability some. His wife forbade him from going to the ranch alone ever again, certain that he’d have another stroke while he was by himself and she’d lose him. The ranch was sold.

Ed Sr. did live for about another decade, but his trips to the ranch were replaced with trips to the mountains to teach kids about the stars. He’d load up his telescopes in the van and share his love of space and passion for astronomy for a few hours and then sleep in the van before driving home in the morning.

When his father died Ed Jr. inherited the van, along with a lot of other items. He brought the van to Buckeye Arizona and was determined to finally get around to building the camper van that his dad had always envisioned. But, as we all have to do sometimes, he eventually came to the realization that the van had mostly sat for years and years, and although he’d taken it camping once or twice, he was never really going to get around to building it out. As hard as it was to finally let go of it, he knew it was time. So he brought it in as a trade in to purchase a new daily driver for himself. 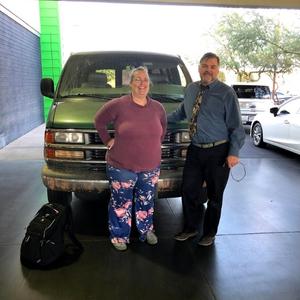 “I honestly never thought I’d see it again. Or, if I did, it would be converted into a work truck and have some guy’s plumbing business information on the side and ladders on the top,” he told me.

That’s when I told him my VanPlan. How I wanted to convert it into an adventure van and travel the continent. That it was covered in mud because I’d just spent the weekend in the mountains.

He started to choke up. “I can’t tell you how much it means to me not only to see it, but to know that it’ll actually still be used like my dad always intended.”

It’s weird how things work sometimes. I don’t really believe in fate or luck or whatever. But I do think that humans are pretty darn amazing and sometimes we’re a bit more connected than we think.